James Pulham and Son are mostly remembered these days for the rock gardens, ferneries, follies and grottoes they built during the Victorian years.   When natural rock was not economically available, they simply ‘made their own’ by building heaps of old bricks and rubble, and coating them with their proprietary brand of cement that soon became known as Pulhamite.   The people who built these artificial ‘rocks’ were known as ‘Rock Builders’, and their craftsmanship lay in their ability to sculpt the surfaces of the cement to simulate the colour and texture of natural stone.

As garden fashions gradually evolved through the Edwardian period, the firm extended their portfolio to include grand, formal balustraded terraces etc, and Italian and Japanese-styled gardens in which to house the plants brought home by the ‘travelling gentry’ from their grand tours overseas – but that is not the subject of this article.   The story of the lives and work of James Pulham and Son is told in Rock Landscapes – The Pulham Legacy – my book that is due to be published by The Antique Collectors Club in early 2012 – which will also include reviews on more than 40 of the firm’s most prestigious sites, including Sandringham, Buckingham Palace, Madresfield Court, Waddesdon Manor, Highnam Court, Friar Park, Danesfield House and Dewstow etc.   Updates will also be included on my website at www.pulham.org.uk, where all visitors will be welcome, so there is no point in going through all that here.   Suffice to say that there were four generations of Pulham involved in this business, and each was named James, so, for the purposes of simple identification, I have called them James 1, James 2, James 3 and James 4.

When the firm finally went out of business c1939, all the company records were destroyed, and the only positive record of the work they did for their ‘satisfied clients’ was appended to a promotional booklet entitled Picturesque Ferneries and Rock Garden Scenery,[i] written and published by James 2 c1877, and that only referred to their rock gardens and other landscaping projects.   During my visits to many of their gardens that still survive today, however, I have become convinced that they were also involved with other features that never got mentioned in the booklet.

Walled Gardens – or, at least, the walls that the Pulhams built to enclose them – was one of them.   I found my first clue to this when I visited Highnam Court, near Gloucester, which, in 1847, was the home of Thomas Gambier Parry, whose son, Hubert Parry – later to become Sir Hubert Parry – is nowadays remembered as the composer of Jerusalem.

James 2 (1820-98) was still in his late twenties at this time, and had only recently begun to apply his stone modelling skills to the art of garden landscaping.   He had yet to make his reputation in this area, so it is hardly surprising that Gambier Parry requested a sample of his work before engaging him to create a rock garden, and build – or possibly replace – the wall around his Kitchen Garden.   His sample still stands at Highnam Court, and is shown here in Fig 1 – the pillar and wall ends are his, but the figure is new.

Fig 2 shows The Ladies Walk at Highnam Court, which runs along the back of the garden, and the dimpled pattern of the pillars shows up clearly – in this case, the vases are almost certainly not Pulham’s, and the figures along the walk are definitely not.

Another fine example can be found at Ponsbourne Manor, near Newgate Street, Hertfordshire.   It is known that the Pulhams constructed a fernery and watercourse here in 1858, and I have been told by a direct descendant of the Pulham family that one of their ancestors was actually involved in building this wall, although it is not clear whether this would have been done at the same time as the other work, or sometime later.   Whenever it was built, it is a really sturdy construction, with a beautifully shaped entrance in which the inset curve is carried forward to form a curved seat on either side.   The banding of its pillars and walls, and its ball finials are typical of other examples I have seen, and the walls are ‘serrated’ to increase their stability.   All in all, this is a very imposing and handsome piece of work.

Fig 4 shows the wall of the Kitchen Garden at Welbeck Abbey, near Worksop, Nottinghamshire.   The firm did some work here between 1862-67, although I have no documentary proof that this included the Kitchen Garden.   However, the style of the ‘doorways’, and the banding and finials on the pillars leaves me in hardly any doubt.   After all, with the Pulham workmen on site, why would the fifth Duke of Portland employ someone else to come in and build just this? 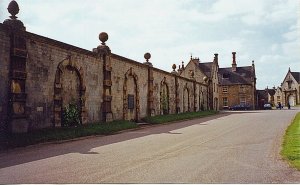 The next example is another that can definitely be ascribed to Pulhams.   It was built in 1866 for Robert Hanbury Jnr – whose family were Partners in the brewing firm of Truman, Hanbury and Buxton – at Bedwell Park, Essendon, Hertfordshire.   A note in James 2’s promotional booklet states that he was called to Bedwell Park to construct a:

‘Fernery, and cliffs to hide walled garden; Root House for ferns and shrubs . .’

The explanation for the ‘cliffs’ was simple.   Robert Hanbury’s Kitchen Garden was in a direct line of sight from the house, so, rather than have to gaze upon a blank surrounding wall that was about 15-18ft high and 50 yards long, he decided to get James 2 to conceal it with some rockwork ‘cliffs’, shown here in Fig 5.   These extend a short way round the corners at each end, and there are planting pockets all along it.   Just behind the small ‘island’ in the centre of this picture is the entrance – Fig 6 – to a short passage that leads to the concealed ‘root house’ and fernery behind the rocks.   Although these are no longer functional, the good news is that, when I visited in 2001, the rockwork was still in very good order, and reasonably well maintained. 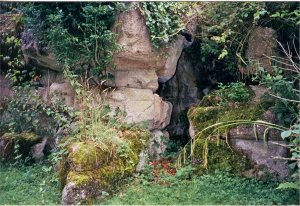 Robert Jnr died in 1867, aged 44, and was survived by his father, Robert Hanbury Snr, who lived at nearby Poles Park, near Ware, in Hertfordshire.[ii]   James 2 constructed a ‘Conservatory, fernery and dropping well’ here in 1865, so it was probably as a result of this that he was commissioned to build the ‘cliffs’ and root house at Bedwell Park.   Robert Snr also had greenhouses and a Walled Garden built in 1855, but it is not known if the Pulhams were involved at that time because, for some reason, these non-landscaping features were rarely mentioned in his booklet.

When Robert Snr died in 1884, Poles Park was inherited by his grandson, Edmund Hanbury, whose wife, Any, was born at Warthill, Aberdeenshire.   Edmund was only 34 at the time, and was then living with his stepmother at Bedwell Park.   He and his family moved to Poles Park, and soon began to make major alterations and extensions to the house and estate.   They removed the conservatories on the terrace – widening it to make it ‘a very delightful feature’ – and replaced James 2’s rose garden with a lawn.

They created an artificial lake and other ornamental rockwork features for which James 2 was certainly responsible during the late 1880s.   It is also recorded that they ‘removed a central wall in the Walled Garden’, and this is where I can only rely on my instincts and assumptions.   The purpose of that exercise was apparently to replace it with the one shown in Fig 7, the design of which was based on the one at Amy’s home at Warthill, which, in turn, was copied from an ornamental entrance seen in the Far East.   The pots in front of the entrance are theirs, and, although it is certainly an unusual design for them, my reaction is the same as it was at Welbeck Abbey – if the Pulhams were on site at the time, why would they bring in another firm to build this?   Whatever the true answer, Fig 8 proves that it is still in good condition. 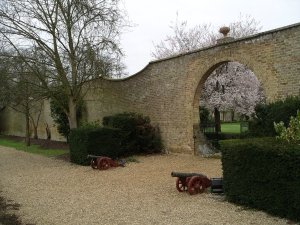 The final example comes from the Royal Estate at Sandringham, in Norfolk.   Those fortunate enough to have visited the gardens at Sandringham will have seen the lake with its rocky banks and boat cave – all of which was the work of James 2 during the late 1860s – but there is hardly any doubt that the firm returned here during the 1890s, when some major alterations and extensions were made.   The Kitchen Garden is one feature that was created at that time, and the walls, entrance and ornamentation all carry signs of Pulham’s involvement.   Here again, I have found no documentary evidence to support this claim, but, for me, the picture in Fig 9 is evidence enough. . .   Anyone interested in finding out more about the lives and work of James Pulham and Son will not have long to wait for the book, but, in the meantime, all visitors to www.pulham.org.uk will be welcome.