These days, James Pulham and Son are mainly recognised as the eminent firm of Victorian and Edwardian landscape gardeners who specialised in the construction of picturesque rock gardens, ferneries, follies and grottoes etc, who also manufactured a wide range of extremely high quality terracotta garden ornaments, such as vases, seats, fountains and balustrading etc.   But that is not the whole story, because there were actually four generations of Pulhams, with one son of each generation called James.

James 1 was born in Woodbridge, Suffolk, in 1793, and trained as a stone modeller with the firm of J & W Lockwood alongside his younger brother, Obadiah.   The brothers moved to London during the 1820s, and, in 1827, Obadiah went to work for Thomas Smith – architect and County Surveyor of both Hertfordshire and Bedfordshire – leaving James 1 to start his own building and stone modelling business in London.   Thomas Smith had a particular interest in the gothic style, and designed a number of fchurches in the Home Counties and around Europe.   Obadiah was his Clerk of Works, and James 1 was often engaged to undertake some of the building work.

Thomas Smith was fascinated by follies – so much so that, c1834, he built a mock Norman tower and archway in his own garden at Hertford.   Fig 1 shows the tower, with the ‘remains’ of an old wall and archway behind it.   There is little doubt that the Pulham brothers were involved here, as this was very similar to work they had done whilst working with the Lockwoods in Woodbridge.

Their most significant project of this sort was at Benington Lordship, near Stevenage, where a massive Norman façade, including a twin-towered archway, was built across the front of the house.   The illustration from James 2’s 1877 publication, Picturesque Ferneries and Rock Garden Scenery, is reproduced in Fig 2, and many more details and pictures are shown in the book.

James 1 died in 1838 – very soon after the completion of the Benington folly – and his, James 2, took over the business.   He moved to Hoddesdon c1842, which was conveniently placed near Thomas Smith’s office, so that he could continue to take on some of Smith’s church-building projects, as well as working for his own clients.

One of these was John Warner, who lived at ‘Woodlands’, in Hoddesdon, for whom he built a large folly in his garden in order to obscure the sight of a new gas-holder that had recently been erected nearby – an old photograph of which is shown in Fig 3   It is not known whether or not Smith was involved with this, but Warner asked James 2 to stay on and help him convert a stream that meandered through his estate into an artificial lake, with rocky banks, cascades and a large fountain.   James 2 had never undertaken work of that nature before, but his stone modelling skills – which he inherited from his father – made him ideally suited to the task. 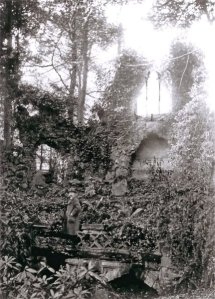 With few natural rocks available, he simply made his own by building up heaps of old bricks and rubble, and coating them with cement which he then sculpted to simulate the colour and texture of natural stone.   It worked extremely well, and he began to get increasingly interested and involved with the construction of rock gardens and ferneries – later moving to nearby Broxbourne, where he built himself a new house, and a Manufactory in which to produce a new range of extremely high quality terracotta garden ornaments, with which he won a number of awards at the International Exhibitions of the 1850s and ‘60s.   But more about that in the book.

In 1863, Alderman Stone engaged James 2 to construct a ‘Stream and ruins’ in the grounds of his house, ‘The Hoo’, in Sydenham Hill Wood, southeast London.   The ‘stream’ is now no more than a half-submerged ‘rocky path’, although the folly is still there, as can be seen in Fig 4.   The walls are basically of rough brick construction, coated with Pulham’s proprietary cement – by this time commonly known as Pulhamite – and scribed to simulate a mediaeval ‘ashlar’ finish.   Only half of the arch now remains standing, which is a pity, but one can still see the telltale scribing on the walls. 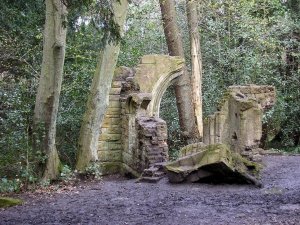 In 1865, with commissions coming along at an increasing rate, James 2 brought his son, James 3, into the business to form James Pulham and Son, and one of their clients was William Leaf – a successful London soft goods merchant who specialised in silks and ribbons – who lived in Park Hill Mansions, one of several very large properties situated on Streatham Common North, also in southeast London.   He made extensive additions and alterations to the house and grounds, and turned to the Pulhams for help.   The characteristically brief notes in James 2’s booklet describe the features as:

‘Fernery and Artificial Ruin of Castle gateway and Tower for summer retreat and view.’

His folly took the form of a ruined mediaeval gateway and tower, pictured in Fig 5, the main objective of which was to provide a commanding view over Streatham, and to the heights of Wimbledon and the Surrey Hills beyond.   He sadly died soon after the work was completed, and, in 1880, the estate was purchased by Henry Tate, founder of the Tate Gallery, and proprietor of the famous sugar company that is now known as Tate and Lyle Ltd.

There is a downstairs and an upstairs room in the tower that are still accessible to the careful visitor – although it should be noted that this is private property – but, nowadays, it is no longer possible to enjoy the commanding view over Streatham, and to the heights of Wimbledon and the Surrey Hills beyond.

Just 12 miles North-West of Streatham lies Gunnersbury Park, on the boundaries of Hounslow and Ealing.   Lionel de Rothschild – son of Nathan Meyer de Rothschild, head of the ‘English branch’ of the eminent banking family – inherited Gunnersbury when his father died in 1835, and immediately began to invest it ‘with such splendours as were unknown in England outside Her Majesty’s own grounds’.   He devoted a great deal of energy to the cultivation of orchids, and constructed special ‘Japanese’ and ‘Italian-style’ gardens within the estate, and, in 1861, he purchased some more ground at the southwest corner of the estate which included an old clay pit called ‘Cole’s Hole’.   In 1874, he engaged the Pulhams to re-landscape this into a boating lake.

James 2’s initial idea was to construct a rather formal boathouse on the edge of the lake, but, for some reason, this plan was rejected, and it was decided instead to convert the old tile kiln that stood alongside the clay pit, which now rejoices under the much more romantic name of the Potomac Lake.   James 2 transformed this into a gothic-styled boathouse-cum-folly – as shown in Fig 6 – in which one descended to the ‘basement level’ to reach the boats that were moored there.   The banks around the edges of the lake were ‘rockified’ in typical Pulham style.

Elsewhere in the grounds – much nearer the Mansion – is another folly, built in the style of the remains of a Norman archway and keep.   This is pictured in Fig 7, and its purpose was to screen the sight of the stables from the house.

Fig 8 shows a rough archway, situated in the grounds of Ware Park, near Hertford.   There is nothing spectacular about this, and its object was presumably to lead the visitor from one vista in the garden to another.   There are other very similar arches at various locations around Hertfordshire, and probably elsewhere as well. 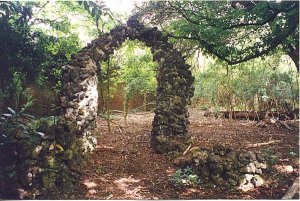 One of my favourite Pulham follies, however, is situated in the grounds of ‘The Dell’, at Englefield Green, in Surrey.   This is an absolutely charming garden that has been lovingly brought back to life by the residents of the flats that now occupy this piece of an estate that was once owned by Baron Sir John Henry Schroder, head of the German merchant banking family who were also associated with the Baltic Exchange, home of shipping insurance.   The Baron was also a distinguished collector and grower of orchids.

Towards the end of the 1880s, he engaged the Pulhams to build a rather small, but extremely charming  rock garden along the small dell that ran along one side of the estate.   This is described in detail in the book, but the feature that is relevant here is the large water tower at the far end, which is near the top of a hill overlooking the valley beyond.   As there is no water source in the estate itself, it was necessary to build a water tower to draw the water up, and released it into the stream the runs through the rock garden itself. 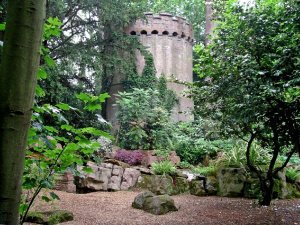 This is no ordinary water tower, however – no stark cylinder that proclaims its utilitarian purpose to all and sundry.   As can be seen in Fig 9, the Pulhams took the trouble to dress it and castellated it in the form of an old circular tower that fits perfectly into its very special surroundings.   There were no short cuts made in the name of economy in those days – the Pulham workers really took a pride in their work.

Don’t forget – keep in touch with all things Pulham at www.pulham.org.uk and look out for details of the publication date of Claude’s book, which will be reviewed by this magazine when it becomes available.   A special feature of the website is ‘Site of the Month’, in which Claude will publish his notes on a different Pulham site each month – none of which will be included in the book.   Anyone interested in contacting him with information or enquiries can do so either via the website, or direct at claude@hitching.net.