Sir Joseph Whitwell Pease Bart – M.P. for South Durham, and grandson of Edward Pease, the ‘Father of the Railways’ – lived in Hutton Hall, near Guisborough, Cleveland, a small market town on the Northern edge of the North Yorkshire Moors, and in 1868 he commissioned James Pulham and Son to construct: 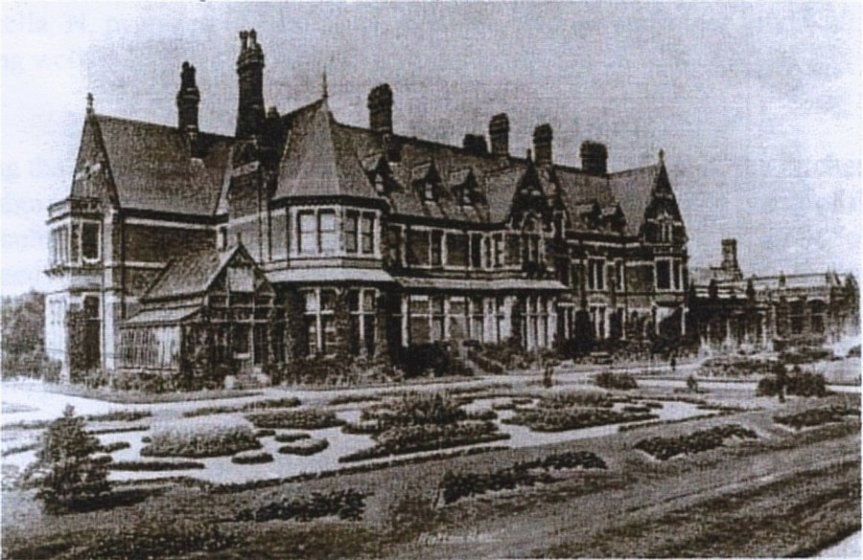 My enquiries into this work led me to a local historian in Cleveland, who put me in touch with Sir Joseph’s grandson, Joseph Gurney Pease, to whom I am extremely grateful for providing most of the brief details recounted here.   Fig 1 is a picture of part of the gardens of Hutton Hall, taken from the Sale Catalogue c1903.   There is a small glasshouse on the left of the house, and the large glass structure to the right is the ‘exotic fernery’ that links the eastern wing to the main house.   This looks quite similar to the one Pulhams built at Poles Park, near Ware in Hertfordshire, just a few years before – see ‘Site of the Month’ #33 – Feb 14, Fig 3.   A section of the interior of the fernery is shown in Fig 2, and it certainly seems to have been a major feature of the house.

The following is a short extract from an article written by a T W Dollery in 1902, in which he reports on a visit he made to inspect the gardens at Hutton Hall:[ii]

‘Hutton Hall, near Guisborough, is the Cleveland residence of Sir Joseph Whitwell Pease, Bart, M.P.   The building is a modern magnificent pile, charmingly situated in the middle of the Hutton Lowcross Valley, and under the shadow of a fine range of hills.   To the south-east is Guisborough Highcliffe, 1,000 ft above sea level, and three miles to the west stands Roseberry Topping, towering up to 1,054 ft.

‘The name Pease is, in the north of England, a household word.   The family of which Sir Joseph is the head, is known to everyone as pioneers in the railway system; pioneers in the development of the great coal and iron industries of Cleveland and South Durham, and founders of the town of Middlesboro’.   They are always ready to lend a hand in forwarding the interest of every good cause brought under their notice, and always ready to assist and help on the deserving poor.   Such is the owner of Hutton Hall, and happy are those whose privilege it is to be in his employ.

‘Many readers of The Gardening World have heard of Hutton Gardens, which have become famous under the skilful management of Mr James McIndoe. . . I recently made a special visit, my object being to interview Mr McIndoe, and have a look round his extensive charge.

‘Leaving the pretty little station of Hutton, we walked straight off the platform into the gardens.   A couple of minutes’ walk brought us to the conservatory at the west end of the Hall (on the left in Fig 1).   This conservatory connects the morning room with the drawing room, and is filled principally with flowering plants of various kinds.   A splendid lot of Thujopsis funebris in pots was noticed, their beautiful green foliage forming a delightful contrast with its associates.

‘From here we passed along the front of the Hall to the large conservatory, which covers an area of 90ft x 40ft, and is 20ft high.   Many beautiful Palms, Tree Ferns, Araucarias, Bamboos etc were noticed.   Very fine specimens of Areca Baueri, Dicksonia Antarctica, Chamacrops Fortunei, Corypha Australis, Araucaria Bidwillii, were noted, and the way in which all the plants etc luxuriate is a sure testimony that the conditions are agreeable.

‘From the conservatory we walked along the beautiful terrace, which is laid out somewhat irregularly, but is quite in keeping with the surroundings.   It is 100yds by 40yds, and is laid out with flower beds.   From here, I passed through on to the tennis ground, which is bounded by a delightful waterfall and extensive rockwork, which gives it a truly charming appearance.’

From here, Mr Dollery turned his attention to the glasshouses, of which there were many, and all of which ‘are kept to perfection, and built and ventilated on the most up-to-date style’.   There were three vineries, two Peach houses, and an orchard house, but the fernery obviously made an especially favourable impression on Mr Dollery:

‘The fernery is very prettily constructed, and has a very natural appearance, with its miniature waterfalls which tumble over the rocks and fall into the pool below, in which tiny fish disport themselves.   All the ferns seemed quite happy with their surroundings.’

Mr Pease – referred to here as Gurney, in order to avoid confusion with the name of his grandfather, Joseph Whitwell Pease – told me that, tragically, his grandfather’s ownership of Hutton Hall was short-lived.   In midsummer 1902 – just a few months after the publication of Mr Dollery’s article – there was a Bank crash in which Sir Joseph and his two sons were the sole partners.  They suffered unlimited liability as a consequence, and were saved from bankruptcy only by the great generosity of other members of the family and friends, but one inevitable consequence was the forced sale of the Hutton Hall estate.

By a rather strange coincidence, Gurney’s father, Sir Alfred Edward Pease, did come into contact with Hutton Hall again some years later, when it came up for sale.   As Chairman of a family company called The Owners of Middlesborough Estate Ltd – a considerable part of whose business was in real estate – he was offered it; a purchase price was agreed, and the Hall, gardens, village houses and farms were bought by the company.   As Gurney recalled: ‘In this strange way, my father, at the end of his life, became once more associated with his childhood home.’

Hutton Hall was unoccupied, and the gardens were derelict at the time of this sale in 1935, and remained so until it housed a number of Spanish nuns and Basque refugees during the Spanish Civil War, after which it was used by the military during the Second World War.   The Owners of Middlesborough Estate Ltd were taken over by a public quoted property company in 1985, and Mr Pease feels certain that they no longer have any interest in any part of the Hutton estate.   The Hall itself, and most of the surrounding gardens, has now been converted into flats and Executive-type housing.

Gurney himself never knew much about the estate, because his childhood was spent a few miles away, in Pinchinthorpe House, which Sir Joseph made over as a wedding present to his son, Sir Alfred – Gurney’s father.   He consequently has no clear recollections of the ‘waterfalls in a mountain stream,’ referred to in James 2’s notes, but he did manage to find a couple of short extracts from his grandfather’s diaries that are relevant to this work.

‘21st October, 1868:   A wet, dirty looking morning, stuck to my stakes for a while, then Pulham the rock workman came to lay out the stream here in front of the west windows.   Walked with him up to the quarries, and took him generally round the place.   Started him at work; shot in the afternoon for the house, then with Pulham over his work which looked well in stakes.’

‘1st April, 1869:   Progress on stables building at Hutton behind hand.   The stream rockwork (west side of the Hall) looking really well.’

These entries are brief because of the small amount of space available in his Letts’ ‘3 Days to a Page’ diaries, and the fact that there are only two references is probably due to the fact that Sir Joseph spent most of his time at his London home.   In May each year, he generally had a long fishing holiday in Falmouth before resuming parliamentary duties in London, and, during the summer recess, he generally spent at least a month grouse shooting and deer stalking at his shooting lodge in Scotland.

According to Sir Joseph’s Abstract of Expenditure ledgers for the years 1868-70, the Pulham rockwork cost a total of £1,085: 1s: 0d, which, in those days, would have been considered a considerable amount of money.

Gurney did not have a picture of the waterfalls, but Grace Dixon, the local historian from Cleveland, did manage to find one for me, and it is reproduced here as Fig 3.