People and Places Discussed and Pictured in Chapter 37 of:

The traditional patrons of James Pulham and Son were beginning to feel the strain of the growing financial pressures of the early 1900s, but this was compensated to some extent by the advent of the railways, and the ability of people to travel more easily to coastal resorts.   The Corporations of a number of these towns engaged the firm to ‘beautify’ their attractions by the creation of new gardens etc – a pattern established by Ramsgate in 1894, when the Pulhams built the rockwork along Madeira Walk, as described in Chapter 21. 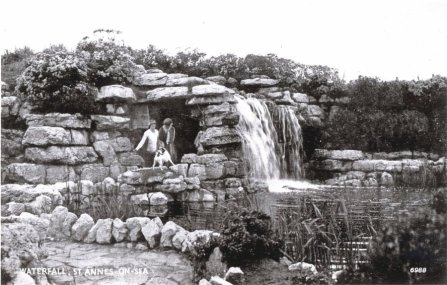 In 1914, the Lytham Council – now combined with St Annes to become Lytham St Annes – engaged the firm to build two waterfalls on the new lake in the Promenade Gardens.   They were then invited to lay out a rock and water garden in the St George’s Gardens – later to become known as the Ashton Memorial Gardens – where they erected a typical ‘Pulham bridge’ and arranged rocks to simulate natural geological strata around the irregular shoreline of the lake.   This was fed by a cascade and waterfall at the southern end, and much of the rockwork still survives today – the water supply having been reconnected during a recent restoration programme.   They then laid out and planted both the Rock Garden and the Rose Garden, and made some alterations to the Waterfall on the South Promenade.

On the Fylde coast in West Lancashire is St Anne’s, a popular seaside destination – and totally differing in character from its nearby lively neighbour Blackpool.  For over a hundred years this small township has been particularly favoured as an elegant alternative to our traditional all-action resorts of funfairs, gaming arcades, lively lidos, casinos, neon lights, souvenir shops and music hall frivolity on the piers.

For those in pursuit of relaxed recreation, the promenade at St Anne’s offers a leisurely and delightful amble, where the extensive and linear rocky gardens display much horticultural diversity, from formal beds and architectural features through gentle recreation to naturalistic scenery.   Many features of these gardens were constructed by Pulham and Son in 1913 to 1914.   However, by the early 2010s it was unclear how much could be attributed to the Pulhams and indeed others.

The gardens had slowly lost their historic splendour, and subsequently Scott Wilson and later Harris Consulting were commissioned to research, survey and appraise the site.   Harris Consulting soon identified historic attempts at the north end of the gardens to emulate ‘Pulhamite’ rock, albeit rather unsuccessfully.   It was also brought to light that a certain Mr E. Thomas had originally laid out the gardens from 1898, with an extension in 1906.

A few years later, St Anne’s Council proposed a sizeable southern extension to the gardens, incorporating a striking feature to face the prestigious Grand Hotel.   Pulham and Son were approached and appointed to deliver these works which cost £2,600 and required 1,000 tons of limestone rock, sourced from Derbyshire and Clitheroe.   On completion the Promenade Gardens were described as ‘the prettiest esplanade in the country.’

In 2015 following fruitless attempts to secure funding, it was decided to use Council staff to carry out sensitive work on the gardens.   Harris Consulting was chosen to produce a conservation management plan with priorities and targets, and activity soon commenced that year.   The initial clearance and repair work undertaken was to the main feature opposite the Grand Hotel – a grotto, waterfall, lake and romantic bridge.   Ivy clearance here revealed a lost and unusual element.

The expanse of rock face to the side of the grotto (all in Pulhamite) contained numerous protruding planting pockets, all quite formally arranged.   This was rather curious in respect of Pulham’s work customarily being persuaded by natural geology.   However, Pulham’s gardens were an extension to the existing arrangement and it is now clear that a portion of this area was laid out in the ‘gardenesque’ style to marry into the neighbouring landscape.

This wasn’t the only interesting discovery – a decorative pebble path was soon revealed, leading to the elevated landscape above the grotto which extends south to a sunken alpine garden.   The elevated landscape with its meandering paths affords the visitor panoramic views over the northern section of the site and out to sea to the west.   Much of this area is constructed in the usual rugged picturesque style and includes many drystone retaining walls plus two shelters in random stone.

he alpine garden at the extreme south of the site can be accessed from both ground level and via steps from the landscape above.   Vegetative clearance has exposed many rocky outcrops and the original layout of the historic landscape can now be appreciated.   Although much of this intimate enclosed area is quite rugged, it is apparent that the ‘gardenesque’ style has also been employed here to ensure harmony throughout the gardens.

The footbridge over the lake is particularly attractive, having a pebbled path surface embellished with maritime emblems.   It serves four purposes – a crossing from one character zone to a contrasting zone; an elevated view over the lake with its islands and stepping stone path; the bridge arch ‘frames’ views north and south; the waterside path beneath allows a transit from one end of the lake to the other.   Here, ivy has been partially removed, with just enough retained to emphasise its romantic style.

Ivy is habitually a problem for neglected Pulham rock scenery.   The Pulhams favoured ivy and other climbers and trailers to add to the naturalistic ambience, and se vigorous plants were previously maintained by careful, annual pruning to preserve the effect.   In later times, mismanagement, budget restrictions and general neglect resulted in sections or whole sites lost to the unchecked invasive vegetation and the Promenade Gardens site was a typical example.

Replanting has been experimental as the site has limitations due to salt spray from the sea, but quite a few species are now growing happily in their habitat.   On the seaward side, Marram grasses are grown along the whole length of the site – these are suited to the maritime conditions and also help to protect the major decorative areas of the site that are enjoyed by patrons of the facing hotels and visitors strolling along the South Promenade.

For the majority of this site, quarried limestone boulders have been used to build the many retaining walls, two shelters and the bridge.   However, the ‘ideal naturalistic’ grotto and its associated rockworks are built in attractive water-worn limestone.   It is here that the typical Pulham trademarks can be seen; outcrops from the mother-rock, a cascade veiling the cavernous recess of the grotto, convincing strata, the thin ‘weak’ layer, recesses, fissures, and planting compartments.

Visitors can take pleasure in a gentle stroll along the length of these gardens, taking in the various styles of rock scenery implemented by Pulham and Son.  The gardens begin at St Anne’s Pier and stretch out along the South Promenade for 900 meters.   If time allows, the visitor can also peruse the Ashton Gardens in town, where yet more excellent examples of Pulham’s work can be seen.

An additional ‘Chapter’ was published each month over a period of five years on this website under the tag of ‘Where? / Site of the Month’, and these can now be accessed alphabetically under the comprehensive ‘Where? / Gazetteer’ tag, so don’t miss those.   Click on the link to see the complete list of Pulham sites described and illustrated by Claude Hitching.

Another link that you might like to refer to takes you to the ‘Press and Media / Book Reviews’ tag, where you can read all the reviews of ‘Rock Landscapes‘ written by professional critics in the National and Garden Press.

To check out the names of the People and Places featured and illustrated in any of the other Chapters, click the CONTENTS link to return to the main CONTENTS Page.   Click here to go direct to the ‘Book Shop’.   Happy Reading to all our followers

A full description of the work done by James Pulham and Son at Lyrham St Annes – together with a number of pictures – can be found in Chapter 37 of Rock Landscapes: The Pulham Legacy – the critically-acclaimed and lavishly illustrated definitive story of the lives and work of James Pulham and Son.   Written by Claude Hitching, with featured photography by Jenny Lilly.   Published by Garden Art Press.