Just three miles west of Dorking, in the valley of the Tillingbourne, lies the Grade II* listed Wotton House, which was purchased by George Evelyn in 1579, and has remained in the Evelyn family ever since.   George’s youngest grandson was John Evelyn, the famous diarist, who eventually inherited Wotton at the age of 79, on the death of his elder brother.   He wrote of Wotton:

‘. . . The house is large . . . and so sweetly environ’d those many delicious streams, and venerable Woods, as in the judgement of strangers, as well as Englishmen, it may be compared to one of the most pleasant seates in the Nation.’

John Evelyn was also a famous botanist and tree expert, and helped to design the Italianate gardens around the house in 1640.   This included a Temple at the rear of the house, just in front of the end of a hill that was carved into a series of terraces.   These features still survive today – although the Temple has been significantly restored since then – and the original gardens remained substantially intact until at least the end of the 18th century.

William John Evelyn – a descendant of John – was responsible for a number of further alterations towards the end of the 19th century, and the gardens that survive today are largely the result of his restorations.   The property is now leased to the Hayley Conference Centre, who completely refurbished the house, and developed the site as a conference centre and hotel.[i]   As part of this development, the grounds have been extensively restored to a Management Plan developed by the Colson Stone Partnership.

Most of the above notes are based on A Brief Guide to the Gardens of Wotton House published by the Surrey Gardens Trust, and one of the things that intrigued me about it was the repeated reference to features that first appeared in a set of photographs taken in 1898.   This indicated that a number of changes or developments had taken place just before that time – somewhere around 1896-97, when William John Evelyn was Lord of the Manor – so I decided to contact the Colson Stone Partnership to see what additional information I could glean.

It transpired that some of the old photographs they discovered during the formulation of their Management Plan [ii] came from a Country Life article dated 22nd October 1898, and some from the Surrey County Records Office.   Only three of them are reproduced here, but they helped to convince me that – just like the gardens at Worth Park – discussed in Chapter 15 – several features in the gardens at Wotton were the creation of James 3.

Fig 1  –  The mouth of the grotto, with the walls of the bridge in the foreground   (Photo by Mick Hibberd)

The first indication was the small Tillingbourne Stream that enters the estate from the south-east corner, and passes up the east side of the house; along the front, and down to the old Wire Works Pond, just beyond the western boundary.   It has been revetted – i.e., lined with stone – along the eastern side of the house, and, in typical Pulham style, some ‘rocks’ begin to appear along the opposite edge of the stream from the house, gradually developing into a magnificent Pulhamite grotto, reached by a small bridge over the stream – shown in Fig 1.   As can be seen from this picture, there is an attractive parapet to the bridge over the stream, and this runs all the way along the stream, and then along the terrace at the back of the house.   The centre panels of this wall are formed from half-round terracotta tiles, and this is an almost exact copy of the terrace wall at Danesfield House, Medmenham, Buckinghamshire, discussed in Chapter 28 of the book.

The grotto has a central pillar, and is about ten feet high.   There are also some traces of mica in the cement that sparkle in the light.   Fig 2 was taken just beneath the ‘hole in the roof’, and clearly shows the stratification mortar between the ‘rocks’.   The inscribing lines here are rather ‘regular’ – almost as if the ‘rock builder’ scored them with his fingers – and are a very similar ‘signature’ to some observed at other sites, such as Merrow Grange, featured in Chapter 25 of Rock Landscapes: The Pulham Legacy.

There is a flight of rough stone steps on either side of the grotto – one of which is shown in Fig 3 – that lead up to a rather small flat plateau on the top, so the grotto would have made a relatively cool retreat on hot summer days, with a rather limited facility for sunbathing on the roof if one felt so inclined.

Fig 2  –  Beneath the ‘chimney’ opening of the grotto, showing the patterns of the stratification between the rocks

Fig 3  –  Steps leading up to the top of the grotto

According to the Guide to the Gardens, the present South Terrace is a ‘19th century restoration’, as is also the wide axial path linking the house to the Temple, so this helps to confirm for me that the Pulhams were also involved in this part of the project    A flight of steps leads up to the top of The Mount from behind the Temple, and one can look down from here and get an excellent panoramic view of the gardens – as can be seen from Fig 4. 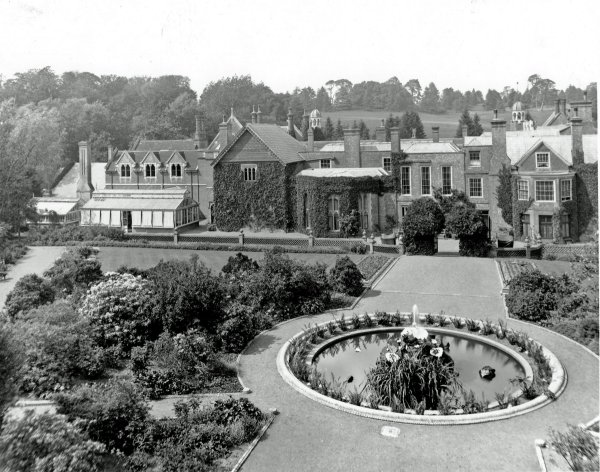 Fig 4   –  The Terrace, Fountain and Ferneries from The Mount c1898   (Photo reproduced by permission of Country Life) 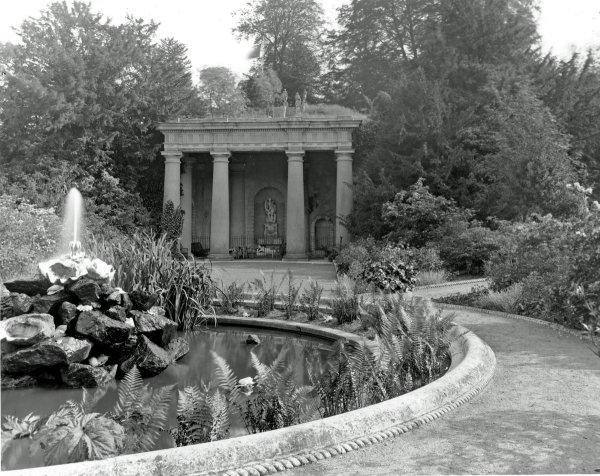 The boundary wall running along the terrace is clearly visible, but the main feature is the large fountain in the centre of the axial path.   As can be seen from Fig 5 – which also shows the Temple in the background – it is completely round, and the centrepiece is constructed of natural rockwork, rather like the small Pulham fountain pictured in Fig 3.11 of the book.

Another prominent feature in Fig 4 is the double-fronted glasshouse near the left-hand end of the terrace.   This used to be a double-fernery, and Fig 6 looks across the terrace, as it was in 2005, to both pieces of what now remains of the internal rockwork.   The condition of this work was very poor at the time of my visit, but further restoration work was begun soon afterwards as part of the Management Plan.   The work was carried out by Alan Bishop and Associates, Specialist Pulhamite restorers who have also worked on other Pulham sites, including Buckingham Palace, Ross Hall Park, Glasgow, and the Swiss Garden at Old Warden.   They restored the tufa rockwork, and make the structure safe, and the results can be seen in Fig 7.   They also repaired another small water feature near the house. 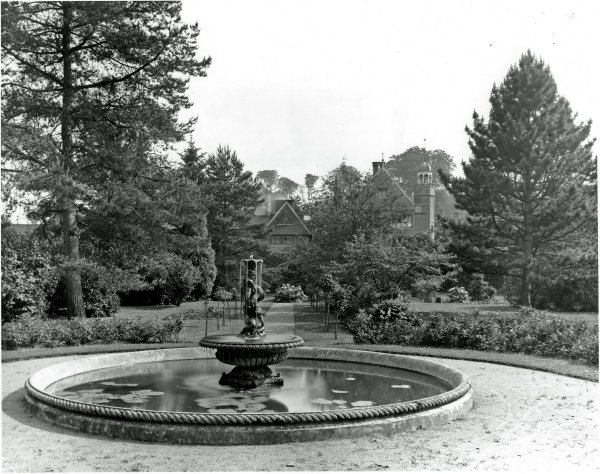 There are the remains of another fountain in the Irish Garden, at the front of the house.   It is now in a dilapidated condition, but the old photograph reproduced here as Fig 8 shows how charming it used to be.   This picture looks past it towards the front of the house, and the braided surround of the basin shows it to be a near replica of the one in front of the Temple – Fig 5.   The Historic Landscape Survey states that the basin – not the complete fountain – was constructed between 1872 and 1896, so this was also almost certainly made by Pulham, although they would not have made the metal figure that currently forms its centrepiece.