One of James 2’s earlier assignments – before he brought James 3 into the business, and expanded the firm to become James Pulham and Son – was to build a fernery on a small chalk pit in Danesbury Park, near Welwyn, which was at that time owned by William-John Blake FRS, formerly the Whig MP for Newport, Isle of Wight, between 1837 and 1841. [i]

Whether or not Mr Blake was the driving force behind the creation of a fernery in the parkland surrounding his house is uncertain, because all horticultural matters were firmly in the hands of Anthony Parsons, who was appointed as Gardener for the Danesbury Estate by William-John Blake’s father in 1851. 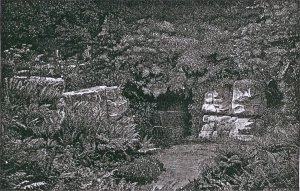 William-John Blake died in 1875, and left the estate to his nephew, Captain Arthur-Maurice Blake and his wife.   Anthony Parsons, the gardener, died in 1880, after a long illness, just before the picture in Fig 1 was published in The Garden magazine.

The Blakes left the property in 1902, after which it had a very chequered history.   It was rented out to a succession of people until 1916, when a disastrous fire nearly destroyed the house.   Mr Michael Dewar – a member of the famous family of distillers – lived there between 1919 and 1937, and it was used as a TB hospital, convalescent home and Service Bakery – supplying bread for the U.K. and U.S. Army and Air Forces – during the Second World War.   The house was used as a TB hospital until 1955, after which it became a home for long-stay patients under the name of ‘The Danesbury Home for the Young Chronic Sick.   When the Hospital moved to new premises in 1993, the house was sold to developers for conversion into apartments, while part of the estate was converted into a golf course. 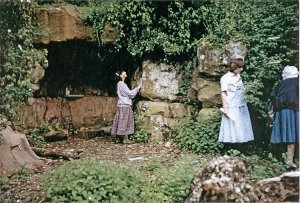 It is therefore more than likely that no-one bothered about the Fernery after the Blakes left in 1902 – or even possibly after the death of Mr Parsons in 1880.   In some ways, this is hardly surprising when one considers its physical location, which is right in the middle of a field some quarter of a mile from the house itself.   One can assume that Mr Parsons would probably have liked to site his fernery somewhere much nearer the house, but, given the fact that there was a chalk pit in this field, it seems that he and James 2 agreed that this would make an eminently suitable location for it.

The brief note in James 2’s promotional booklet [ii] says that he constructed a:

‘Cave, Dropping Well, Pass for ferns and other rock plants in old chalk pit but in artificial stone’

One problem that had to be overcome was getting a supply of water to the fernery, and this was achieved by sinking an overflow tank into the ground at the top of the rockwork, just to the left of the grotto in the pictures.   The tank was slightly tilted so that, when filled by the rain, the water would flow down over the rocks and plants beneath.   No rain, no water, but it was an easy way of ensuring that, when it was available, it was directed to the plants that needed it most. 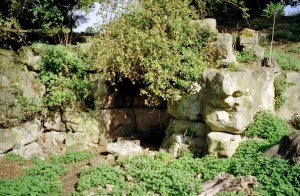 Given its location and difficulty of access, this site is now far too overgrown and hazardous to make a visit a really pleasurable experience.   Despite this, however, it appears not to have daunted some of the local youth, who have seen fit to use the seat recess for their graffiti exercises.

The site is now Listed, and is the responsibility of the Welwyn Hatfield Council, although it is difficult to see what they can do with it.   It can be seen from the pictures that this is no longer a fernery, and would cost quite a lot of money to restore to its original use – especially when the restoration of the essential water supply is also brought into the equation.   The land surrounding the site is private, so for whose benefit would such a restoration be undertaken?   Presumably the Council would have to be responsible for its maintenance and security, but would they also provide an easier access for the public?

If the honest answer to any of these questions is ‘No, because we can’t afford it,’ then one has to face the fact that this is no longer a fernery, but simply an installation of Pulhamite rockwork that was originally constructed as the foundation for a fernery that no longer exists.   If it still justifies listing under this definition, then it must presumably justify some money being spent on cleaning up the site, providing better access, and thereafter providing adequate maintenance and security.   If the Council is unable to justify these costs, then one can’t help asking what point there is in preserving the site in its present condition?   This is not an easy question to ask – and certainly not an easy question to answer.

With a little stretch of the imagination, the large rock to the right of Fig 3 looks as if it has a face sculpted into it.   This can only be seen in certain lighting conditions, but there are a number of these ‘Pulham faces’ around the various sites discussed in these articles, and, once seen, they are something that one instinctively recognises as a Pulham trademark.

[i]    The History of Danesbury, Its House and Its Lands by Gordon Longmead, New Concept Publishing 1999