Soon after James Pulham and Son built the striking new boat house at Sandringham in 1868, they were asked to build another on a magnificent country estate called Pierremont, in Darlington, County Durham.   The mansion was a fine example of Gothic design, and was once the home of Henry Pease, a member of one of Darlington’s foremost Quaker families, and youngest son of Edward Pease, the ‘Father of the Railways’.   Fig 1 is a photograph of Pierremont House, taken c.1875. 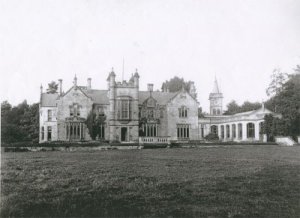 In 1864, Pease purchased some more land – across the road from his mansion – that ran down the side of his estate, in order to improve and extend his vistas.   The land was very boggy – having previously been used as the town’s manure dump – so, in 1869, he invited James 2 to advise him on what improvements could be made.   This was just one year after the Pulhams had worked at Sandringham, and there is little doubt that, in this case at least, the success of one job led to the commission of the other.   One can easily imagine James 2 describing the magnificent lake and boat house he had recently constructed for the Prince of Wales, and Henry Pease deciding that he would like something like that himself.

Fig 2  –  ‘Boathouse on Rocks’ c1875 – constructed by James Pulham and Son at the end of the lake in Pierremont Park, Darlington, in 1869   (Photo reproduced by permission of Darlington Library and Art Gallery)

According to James 2’s promotional booklet,[i] his work at Pierremont involved the construction of a:

These no longer exist, but Fig 2 is a photograph of the boathouse, taken c.1875, and shows that it was very similar indeed to the one at Sandringham.   Fig 3 shows boating on the lake at Pierremont, and Fig 4 pictures a group of locals curling on the frozen lake during the winter.

Apart from the boathouse, this set of pictures includes other features that were common to other sites on which the Pulhams worked.    The conservatory fernery at the side of the Mansion in Fig 1, for instance, looks quite similar to others with which they are known to have been involved.

Another feature is the large ornamental fountain that can be seen in the background of Figs 3 and 4.   This was made in the Pulham Manufactory at Broxbourne, in Hertfordshire, although neither this nor the fernery is mentioned in the firm’s booklet, which only includes details of the actual landscaping work done by the firm.

This fountain is believed to date from 1874, and became known locally as the Pierremont Vase.   Normally, one would have expected it to be called the ‘Pierremont Fountain’, but, in this case, it seems to have got its name from the twelve vases around the base, because an item by a Mr John Downie in the Gardeners’ Chronicle [ii] includes a mention of the fountain, and provides a fascinating picture of what the ornamental lake and grounds were like soon after their creation.   Everything he says describes a typical ‘Pulhamesque’ scene:

‘. . . The next object of attraction as one leaves the kitchen garden is a handsome fountain.   The centre stands above 20 feet in height, with handsome moulded basins.   I had the pleasure of seeing this exquisite work of art in full play.   There are twenty-one jets in all.   These fall into the lower and main basin, which is 7ft in diameter, the circumference being divided by twelve pillars, on each of which is placed a vase, expressly designed for this fountain, and called the “Pierremont Vase”.   These were filled alternately with variegated Yuccas and Dracaena terminalis.   Attached to this fountain are what are called pockets or loops for decorations – bulbs in spring, and bedding plants in summer. . .’

Fig 5  –  A Girl on the Rocks in South Park, Darlington c1930   (Photo reproduced by kind permission of the Darlington Library and Art Gallery)

‘At the time of my visit they were very gay and effective.   The flower beds around the fountain are laid out in grass, which gives a chaste and elegant appearance to the whole.   The lake, though not of large dimensions, is certainly one of the best that it has been my good luck to see – not a shadow of stiffness or formality about it.   Around the sides, very appropriate masses of rockwork have been placed, giving the whole a very natural appearance.

‘The island also is well placed and executed, and, with its appropriate vegetation, looks extremely effective.   I also noticed the gas-lamps, which are lighted up in the winter for the convenience of skaters.   The rustic stone bridge, and the masterpiece of all, the boat-cave – as natural as Dame Nature herself could have made it, next acclaimed attention.   I was indeed much struck with this beautiful piece of workmanship, its fine boathouse and its waterfall, which supplies the lake.   On the ground which finishes this rockery it is intended to construct an arrangement of alpine plants, which will afford ample scope for botanical study.’

Henry Pease died in 1881, and his wife Mary continued to live at Pierremont until she died in 1909.   The estate was then sold for building development, and, although the mansion was divided into flats, it still retains much of its original elegance.

The fountain was presented to the Borough in 1925, and was moved to Darlington’s South Park, about two miles away.   It is likely that James Pulham and Son were involved in this transfer, because there is also a rock garden in South Park that is almost certainly their work.   Fig 5 is a picture of a young girl among the rockwork, and shows what this corner of the park was like c.1930.   This would be when James 4 was in charge of the firm, and one can observe that the layout of the rocks is much more sparse than it used to be in James 2’s day.    It is composed almost entirely of natural rocks, rather than Pulhamite, and typical of the more ‘minimalistic’ style adopted during the firm’s latter years.

The fountain was allowed to deteriorate quite severely over the years, but, between 2003-05, South Park was blessed with a £3.9 mil restoration project, part funded by the Heritage Lottery Fund.   One of the major features of this project was the complete restoration of the Pierremont Fountain, complete with its set of vases.   The result of this work can be seen in Fig 6.

[ii]    Pierremont Park South by John Downie, published in the Gardeners’ Chronicle – date unknown, but would presumably be late 1870s